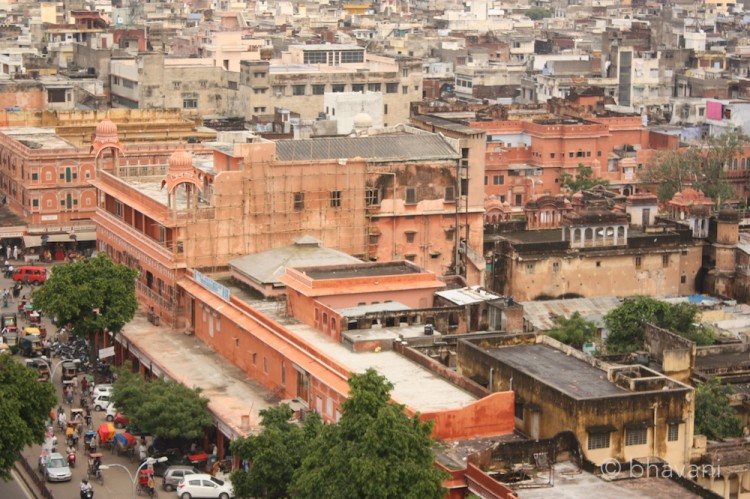 “The city was not always pink!” Raja, my guide, drawled in a voice that was laced with the smell and colour of pan. My guide was a cycle rickshaw driver. He had persuaded me to a quick tour around the walled city laced with many stories—all for Rs. 200.

“They say,” he continued, “that Queen Victoria was visiting long ago. The Maharaja believed that pink was the colour of hospitality. He ordered the entire city to be painted in pink!:

“What! I thought it was about the stones!” I exclaimed. He simply shrugged it away.

By then, we had reached the massive gates to enter the walled city… Centuries ago elephants would have passed through but today cars, autos and two-wheelers honk their impatient way into the heart of Jaipur.

“You see, this was the first city in the plains, otherwise all the cities used to be in the hills. Maharaja Sawai Jaisingh II took double precautions to keep his kingdom safe. He had check-posts high in the hills to keep a lookout for an approaching enemy. And these walls are 3 metres thick and 6 metres high! There are seven gates though a couple were built later.”

We entered from the Ajmeri Gate, went along Nehru Bazaar and then Bapu Bazaar, both lined with a neat row of shops on either side, till we reached Sangameri Gate. “This is the famous Johari Bazaar,” he said. “Do you have money?”

“This bazaar is famous for gold and silver jewellery. If you don’t have money you can buy some cheaper costume jewellery.”

“No, let’s continue,” I said, still shaken by the first question!

Cycling up Johari Bazaar, Raja pointed out the important landmarks…

“And there is LMB Sweet shop, don’t forget their famous ghewar before you leave the city. It will stay good for three to four days. Now keep looking to your left… You will see Jama Masjid… It’s pretty no? And now we have reached Badi Chaupar, the main square of Jaipur… there were underground pipes and people could get water through the year!”

Aqueducts, I thought. Wow, there were aqueducts here more than two hundred years ago. His voice trailed away as he continued cycling through this mad intersection of vehicles, people, noises and my thoughts!

Before I knew it, we had reached Hawa Mahal. The facade of bright pink balcony like structures, each decorated and shimmering in the bright sun. It took my breath away.

“There are around 500 tiny windows they say, so the hawa (or breeze) is very nice inside. The Maharanis would peep down from those little windows and look onto the streets… they were not allowed to step out.”

I quickly looked up, looking for that Maharani but all I saw was design and beauty.

I was to come back later to soak it up at length, so Raja continued till we reached Tripolia Gate or the Triple Gate.

“You know, my father used to tell me that if a commoner used this gate, something bad would happen. This gate is only for the Royalty… you cannot enter from here!”

I looked at the light yellowish gate in front of me through my lens and suddenly there was an angry policeman waving his hands and shouting at me, “Arrey, what are you doing? Nahi nahi… no no… Don’t click photos here!”

A short distance away, through a gate meant for commoners, was the City Palace and closeby, Jantar Mantar. But that was for later in the day. Instead Raja turned into a doorway, took an immediate left, continued till he stopped in front of a board that read Isar Lat. “Go up, you will see all of Jaipur. The tour is over Madam.”

“Where did you learn all the stories from?” I asked as I paid him.

“I pay attention to the guides when they come in my rickshaw. It’s not that difficult.”

An enterprising young man for sure! I thanked him, wished him well and bought myself an entrance ticket.

After a steep walk up, a breathless me reached the top of Isar Lat or the watch-tower. To each side spread the great city of Jaipur from the City Palace and Jantar Mantar, to Hawa Mahal and the tops of all the bazaars. On the hills surrounding Jaipur were the famous Nahargarh Fort and in the distance I could see the green grass of the Chaugan Stadium. I stood there taking in this silence of being far removed from the noise and chaos of the roads below. Peaceful. Silence… Reached into my pocket for my phone; instagram was my favourite travel companion. But it wasn’t there! I searched my jhola bag, camera bag… oh… and ran down, breathless again by the time I came out of the main entrance to Isar Lat.

Raja was leaning against his cycle rickshaw and talking to the security guard. He looked up and said calmly, “Arrey Madam, you left your phone on the seat?”

Visit our website to book homestays in Jaipur and the rest of Rajasthan.

About the traveller: Bhavani is a traveller by choice, photographer by interest and writer by desire. She has crafted 12 heritage walking tours for Audio Compass and her articles have been published in Indian Express, Lonely Planet India, The Alternative and Unboxed Writers. She is in a dedicated relationship with chocolate, her husband and lower case – though confused about the order of preference! She blogs at  merry to go around and tweets @bhavan1.

See all posts by Saffron